Same-sex relations in Myanmar are still illegal. Our partner Colors Rainbow is building a national movement for equal rights. 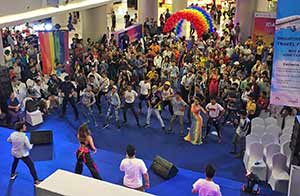 Colors Rainbow coordinated an IDAHOT event at the Junction City mall in Yangon to celebrate the LGBTQI community and to raise awareness of the challenges they face.

IDAHOT – the International Day Against Homophobia, Transphobia and Biphobia—is commemorated in more than 130 countries. In Myanmar, our partner Colors Rainbow spearheaded the IDAHOT celebrations in Yangon, where same-sex relations are still illegal under a colonial-era law.

On May 17, 2019 foreign embassies, businesses, and civil society groups in cities across Myanmar displayed the rainbow flag as a gesture of solidarity with Myanmar’s LGBTQI community.

“The main challenge is to advocate for the repeal of Section 377 of Myanmar Penal Code,” Colors Rainbow’s deputy director Hla Myat Tun said, referring to the statute that criminalizes homosexuality in the country. “It is important that everybody understand what being LGBTQI means, so that Myanmar society can become a colorful society which values diversity and respects the dignity of all,” he explained.

As a partner of Colors Rainbow, Partners Asia was proud to be one of the supporters of the festivities. Some 1,500 people attended, collecting flyers and storybooks, viewing song and dance performances, and engaging in discussions at educational booths. 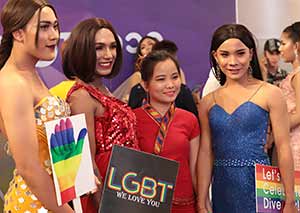 Attendees of the IDAHOT celebration pose for a photo with pride signboards. Colors Rainbow also made public a Facebook photo frame for #IDAHOTMyanmar2019 so members and allies of the LGBTQI community could celebrate the day and raise awareness on social media.

“The event created a safe space for the members of the LGBTQI community to be together, meet new members of the community from the whole country, and feel part of a growing national movement for recognition and equal rights,” Ah Nyo, a media program officer at Colors Rainbow, said.

To build momentum, Colors Rainbow hosted a film screening and panel discussion on legal issues in Myanmar relating to sexual and gender minorities in the week leading up to the event. A presentation of Colors Rainbow’s research on discrimination against the LGBTQI community in the workplace was also held in early May. More than 100 people attended each of these events.

Hla Myat Tun said that Colors Rainbow’s outreach to promote inclusion in the workplace is a new development this year.

Partners Asia is glad to be an ally to Colors Rainbow and to share the ideals of equality that it stands for.