Situated on the narrow peninsula that makes up Burma’s rural southeastern coast, Dawei seems an unlikely location for the field office of the country’s leading LGBT advocacy network. Run entirely by locals, the Dawei office of the organization Colors Rainbow has been implementing a multi-pronged approach to improving the quality of life of LGBT community members throughout Tanintharyi Region. Partners Asia recently accompanied Colors Rainbow staff on visits to village schools outside Dawei, to listen to and learn from LGBT teachers — graduates of Colors Rainbow’s own Partners Asia-supported trainings — working as role models in action.

In an environment where harassment, discrimination and even violence are commonly directed against LGBT individuals, Colors Rainbow Dawei educates affected youth about their rights. For the last three years, they have also adopted a special program to train local teachers about sexual orientation and gender identity in an effort to counter anti-LGBT bullying in schools.

“Giving training in rural areas has the greatest impact. There is less access to information here. We need to educate children, so they can create a society that is inclusive,” middle school English teacher Ye Win Nain, who identifies as a gay man. 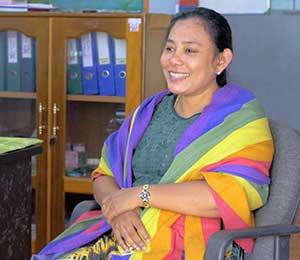 Aye Aye Mon, Colors Rainbow’s field coordinator, who identifies as a straight woman, has long been committed to fighting for equal rights for the LGBT community—and youth in particular.

“Kids already have such negative perceptions of LGBT people that if they find themselves to be LGBT, it is likely that they will try to kill themselves. This is a big problem, and very dangerous,” she explained. “We teach them to value themselves, because they grew up in an environment where they are put down at every level.” —Aye Aye Mon

In Maungmagan, a village on the shores of the Andaman Sea, two openly gay schoolteachers — young men who were born and raised in Maungmagan — drive motorbikes into Dawei town for trainings on LGBT rights. Thirty-one-year-old Ye Win Naing said that “everyone knows” he is gay in Maungmagan, which makes him the target of verbal harassment. When there is an opportunity to serve as a guest lecturer during extracurricular periods, he talks about human rights and LGBT issues. These activities help raise awareness as teachers and students create safe spaces in their communities. Teacher Than Lwin Khant said he feels more confident and accepting of himself since becoming a Colors Rainbow volunteer and attending multiple trainings over the last two years.

“I just want to be free like anyone else,” he said. “I want this for the whole country.”